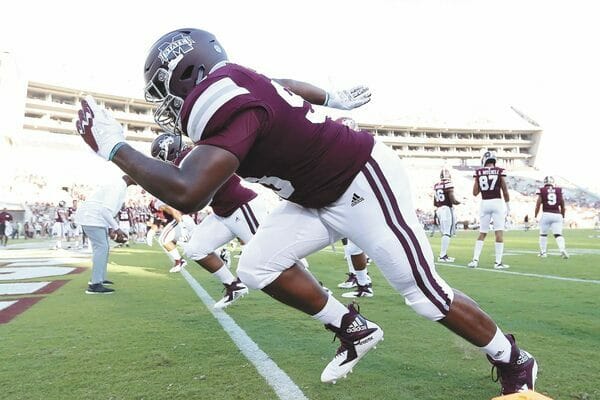 STARKVILLE — Mississippi State University defensive tackle Cameron Young has been formally invited to play in the prestigious Reese’s Senior Bowl in Mobile, Ala., in February.

For Young, who prepped at Franklin County High School in Meadville, the request to take part in the post-season gridiron contest will allow him to showcase his talents in front of decision-makers from all 32 NFL teams.

It’s a really big opportunity for someone who has whole-heartedly embraced the game in general and MSU’s maroon and white in particular.

“I think everything I do from here on out in life, I’m going to represent Mississippi State as best I can on and off the field,” Young said.

“I think it’ll always be home for me. This place has always embraced me and I’ll always appreciate this place.”

The love he has for Bulldogs’ football has propelled Young to quietly and methodically become a MSU defensive centerpiece.

And while Young might not be the flashiest guy and might not get as many headlines as others on the team, he has a reputation of always getting the job done, according to MSU Defensive Line Coach Jeff Phelps.

“He’s such a steady presence,” Phelps said of Young.

“He’s kind of like the adhesive that keeps everything together. I joke around and say he’s the elder of the program. He comes to work every day and he’s tough as nails.

“He loves the game of football, Mississippi State and being around his teammates. Everything you want out of a young man, he’s got. And he’s got a strong voice when he leads the team.”

Maybe more than anything else, that’s one of the biggest evolutions to Young’s game over his time in Starkville.

Now, it bears noting, he’s always been pretty exuberant while on the gridiron.

However, off the field in the early days of his MSU career, Young was somewhat quiet.

He’s blossomed into a Mississippi State star and has embraced the chance to take on a louder leadership role when necessary.

“I’ve always been an actions-over-words kind of guy, but coming into these last couple of years, I’ve had to be more vocal whether it was with the defensive line or the defensive group as a whole,” Young continued.

“I’ve been able to do that and just rolled with the punches.”

In the process, he’s become an all-around player.

After totaling more tackles than any other MSU defensive lineman a year ago, Young is again setting a solid pace for his position group in 2022.

Plus, beyond anything statistics could measure, Young is setting a standard with how he goes about his business.

“(Young’s) going to put good tape out in everything he does, and he’s going to be consistent,” Phelps went on to say.

“He doesn’t get on the emotional rollercoaster where he has highs and lows. He’s just even-keeled all the way through.”

Young has become a special player in just about every way and he’s one MSU is proud to have representing the school at the Senior Bowl.

Those feelings are certainly mutual.

The son of Tremel and Cameron Young is an industrial technology major who loves to fish and play basketball, which he also lettered in during his high school years.

At Franklin County, Young recorded 51 tackles — 43 of those being solo stops — during his senior football season.

He also was credited with 11 sacks, two fumble recoveries and a forced fumble.

He redshirted his initial year with Mississippi State during the 2018 season and made his collegiate debut in a game against Stephen F. Austin.

In 2019 as a redshirt freshman and as a sophomore in 2020, he appeared in eight games both seasons.

During his junior year in 2021, Young registered 51 total tackles — 18 solo — as well as 2.5 tackles for loss, an interception, two quarterback hurries, a pair of pass breakups and blocked a kick.

This season, he has collected 33 tackles and counting — including a team-high seven stops against No. 1 ranked Georgia — along with having a pass break-up at the line of scrimmage against Arkansas.