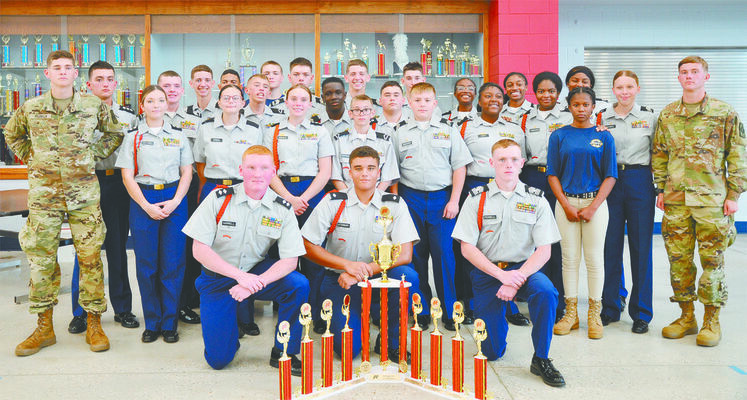 As two-time drill team champions in 2022, the Franklin County Junior Reserve Officers Training Corps’ Bulldog Battalion found itself on Interstate 55 around 5 a.m., Saturday morning for its next competition.

With their Class B uniforms hanging on the bus windows, cadets tried their best to sleep on the rough road to Kiln for an event at Hancock High School.

It turned out to be a cold and dreary morning, but amongst drill team members, there was focus and determination for the mission at hand.

The cadets set foot on the competition field mere minutes after vacating the bus with their yellow berets and rifles in place.

Not even two competitions into Saturday’s event, and it began to rain.

Staff and helpers ran for cover underneath a nearby batting cage, but the Armed Exhibition team kept marching.

Not until they had fully completed the event did FCHS JROTC Commander Arthur Atterberry request permission to exit the drill pad.

Once an official break was called, the drill team sat under the batting cage for half an hour before the event finally resumed.

Event after event, each team was only getting more confident.

Participants knocked out a majority of the events before it eventually started raining again.

This time — watching the weather from the gymnasium — cadets sat patiently waiting for activities to resume and then hit the drill pad to take part in male and female Color Guard and Unarmed Squad events along with Armed and Unarmed Platoon competitions.

While waiting for the final results, the ROTC staff called a game of drill knockout to test everyone’s skills with two of the top cadets — in the end — being from Franklin County.

Franklin County finished as the overall winner of the seven-team Hancock High School competitive gathering and is now headed to the state championships set for Saturday, Dec. 10 at Ocean Springs.