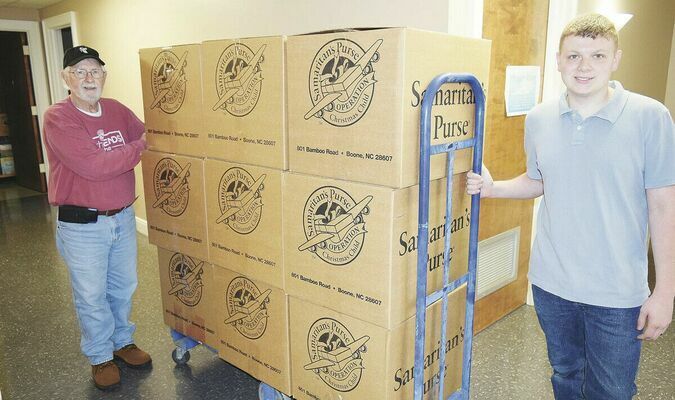 More than 1,500 shoeboxes were collected from throughout Franklin County during the past week and started their long journey to children around the globe as part of Operation Christmas Child.

The drive concluded Monday, Nov. 22 with volunteers at Meadville United Methodist Church sending what was taken in locally to be joined with other donations from throughout the region at Southwest Mississippi Community College in Summit.

“There was a real sense of excitement surrounding this year’s collection with participating churches doing the same number of shoeboxes or increasing their overall totals,” Samantha Sivils, who serves as Meadville UMC’s church relations coordinator, said.

“In our own church, one of our youth — Liesl Holt — constantly asked for prayer for Operation Christmas Child and her enthusiasm had others praying and packing shoeboxes ... we went from around 70 last year to 175 this year.”

For Joe Bowlin, who serves as the county’s OCC drop-off team leader, the excitement, for him, really hit home when he looked as the finished cardboard containers filled with shoebox gifts being loaded.

“It’s a wonderful feeling to see so many of our friends and neighbors doing something to bring the true meaning of Christmas to children around the world,” Bowlin said.

“When everything starts to come together with more and more shoeboxes being delivered each day, it makes you start to think about how many lives are being touched with the message of Christ’s love.”

Operation Christmas Child distributes the boxes to more than 100 countries as a means of sharing God’s love in tangible ways to young people through small gifts such as toys and clothing as well as evangelism.

The outreach is a ministry of Samaritan’s Purse, a Christian organization that partners with congregations across the country to collect the unique gifts leading up to the holiday season.

“When Joe and I were talking about plans for this year, we had set a fairly ambitious goal of 1,700 shoeboxes for Franklin County,” Sivils said.

“When everything was said and done, we will have more than surpassed what we collected last year and we are appreciative for every shoebox that was taken in.”

“This effort is one of the greatest evangelism tools around as it seeks to touch the hearts and minds of children wherever they live,” he continued.

“It means a great deal to those children to know that someone was thinking of them when they open their shoeboxes, and to learn that God loves them unconditionally.”

Bowlin also said he hopes the program will continue to grow and prosper — especially for its ability to reach families in some of the most impoverished and underserved locales.

“Christians are commissioned to reach out to others, and this is an organized way of doing just that,” he continued. “The impact Operation Christmas Child has is beyond compare, and brings a Christ-centered message to those who might otherwise not see or hear it.”

Sivils said young people in her Sunday School program have done the math when the shoebox gifts come into play, and the numbers are astounding.

“When you realize a child is reached every 12 seconds and you start to think of that in terms of an hour, a day, a week, a month and a year, then you get a picture of the impact of this,” she said.

Both Sivils and Bowlin said they want to see the local part of the OCC outreach continue to grow — something that will take prayer and more workers.

“One of the most important things all of us can do to support this effort is to serve as prayer warriors,” Sivils said. “Prayers lead the success we’ve had, prayers are offered over each box and every container ... there’s a lot of prayer from start to finish.

“We’re also thankful for all of the people who give of their time and energy to make the shoeboxes happen and for those who work here at the collection point.

“We can always use more people to help, plus we need some more in the community in leadership roles to assist us in growing the overall outreach in Franklin County and to spread the message of what we’re working to accomplish.”