Homecoming joyous for Dawgs after 34-23 win over Amite County 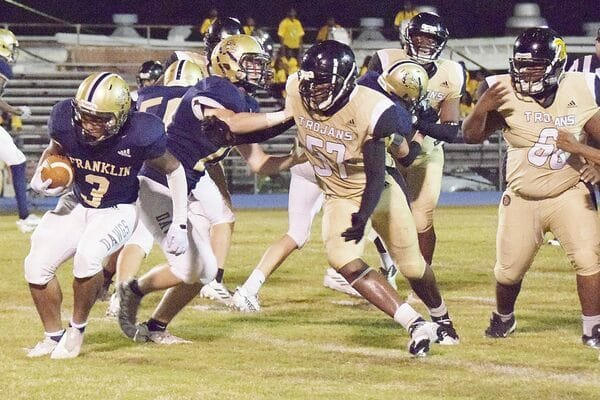 There are more than 150 pictures from homecoming appearing on our dotPhoto page ... you can access those pictures by visiting https://www.dotphoto.com/go.asp?l=franklinadvocate&AID=6843744&T=1

The Bulldogs amassed 309 total yards of offense in the affair — 186 of those coming on 34 carries (an average of 5.47 yards per handoff) and another 123 through the air — to move to 4-1 overall on the season with the victory.

The visiting Trojans gained 155 yards on the ground on 39 totes and had 90 receiving yards on a 6-24-0 throwing effort.

The teams combined for 11 fumbles with FC putting the ball on the turf six times with four of those resulting in turnovers while Amite had five miscues and lost four of those to the Dawgs. The lengthy contest, which took all of three hours to play, was also penalty laden with 20 infractions called with 84 yards marched off against the Bulldogs and 77 against the Trojans.

"We had a 34-7 lead in the fourth quarter and let Amite come back on us late," FCHS Head Football Coach B.J. Smithhart said following the game. "Still, as a whole, our guys did a pretty good job of doing what they needed to do to get the win. We got down early, but came back and put points on the board to give ourselves a little cushion along the way.

"We'll enjoy this win, but will have to get right back to work to prepare for our district opener against Tylertown. It's really a brand new season now with everyone in the district coming in 0-0 in terms of records, and we need to be focused on working hard in practice by trying to eliminate some of the things that hurt us against Amite County and being fundamentally sound in our next game."

Neither the Bulldogs nor Trojans could gain any serious offensive traction in the early going until FC's first fumble with less than four minutes remaining in the opening quarter resulted in points for Amite County.

The Trojans started a four-play drive at the Bulldogs' 13 and finished the series with an eight-yard touchdown pass while facing a fourth-and-five situation with 1:59 left to play in the initial frame. The point-after kick was good and Amite moved out to a 7-0 advantage.

Franklin County had a six-play drive going to start the second quarter, but coughed up the football again on another fumble with the Trojans taking over near their own 4 yard line. After a two-yard pickup on first down, Amite County fumbled the ball and FC's Jaiden Hunt scooped it up in the end zone for a defensive touchdown with 10:08 left in the first half.

Dallas Broome tacked on the extra point kick for the Bulldogs to knot the game at 7-all.

FC scored twice more before intermission — recording a safety with 3:58 showing on the clock as the Trojans were called on a hold in the end zone and then another key fumble recovery by Kameron White.

The subsequent touchdown followed a 17-yard pickup by Donovan Moore on the ground, a 14-yard pass completion from Rancifer to Jaquez Anderson and then a six-yard scamper over the goal line by Tyrese O'Neal with 1:14 remaining in the half.

Amite held the football for the first four-and-a-half minutes of the third quarter only to see its drive stall and the ball go over to Franklin County on downs.

The Dawgs' offense rallied with an eight-play drive — and overcame a holding call, a block-in-the-back penalty and a false start infraction in the process — to score again with 3:17 left in the frame. O'Neal took an option pitch from Rancifer and bulled his way in for the score from 19 yards out.

Broom's extra-point attempt failed, but Franklin County moved out to a 22-7 lead.

Amite's follow-up series to that came crashing down on a pair of incomplete passes and a big sack by Xavier Rankin on fourth down that resulted in a fumble by the Trojans.

The Bulldogs answered with a three-play drive that saw Rancifer connect with Moore for a 13-yard pass completion before Rancifer called his own number and gained seven yards on the ground. With a second-and-three from near the Trojans' 15, Rancifer carried the ball through traffic and scored a touchdown with 1:23 showing on the clock in the third quarter.

Broom's PAT was ruled no good on a second-chance attempt after being run into by an Amite County defender on his first kick try. Still, Franklin County's lead had grown to 28-7 at that juncture.

FC defender Jay Malone then got a sack that led to a fumble by Amite County to disrupt a three-play drive after the Dawgs' previous score. It took little time for Franklin County to score again with Keyundre Felton and Jailon Brown combining to carry the ball toward the end zone.

The series was capped when Brown broke loose from the Amite County 10 yard line and scored with 11:28 remaining in the fourth quarter. The Broom follow-up kick failed and the Bulldogs held a 34-7 lead.

Amite made a comeback bid late with a pair of scores in less than a minute. The Trojans' first touchdown came on a eight-play drive that ended with a two-yard run and then a two-point conversion pass.

The second score by ACHS was precipitated by another Franklin County fumble near midfield. The Trojans had two incomplete passes in the series, but had a 42-yard precision strike through the air with 6:32 left in the game for another touchdown. This time, Amite County ran in the two-point conversion and was able to cut FC's lead to 11 — 34-23.

Franklin County looked to play clock control from that point, but saw its next offensive series end with an interception with 4:07 remaining.

Amite County went back to work and drove from its own 30 to near the midfield, but was called on a hold before throwing three incomplete passes to turn the ball over on downs with less than two minutes to play in the contest.

The Dawgs' Rankin, Rancifer and O'Neal kept the ball on the ground from there to grind down the clock and preserve the victory.

O'Neal paced Franklin's ground game with 59 yards on eight carries while Rancifer carried five times for 42 yards. In addition, Rankin had six totes for 30 yards, Moore carried twice for 22 and Brown gained 19 on nine handoffs for the Bulldogs. Baker carried the ball once for 10 yards and Felton had three handoffs early for four yards.

Rancifer went 9-14-1 in the passing department and hit Moore four times for 81 yards, O'Neal twice for 20, Anderson twice for 19 and Rankin once for 3 yards.

Hunt, White, Jamal Flowers and Zorian O'Quinn each had a fumble recovery for FC while Rankin, Larry Pernell and Jay Malone all had sacks against Amite County.

Franklin County remains at home on Friday, Sept. 30 when the Bulldogs will open district play against Tylertown with kickoff for the contest set at 7:30 p.m. in Meadville.

Statistics by Trey Hill, Lane B. Reed and Sean Dunlap