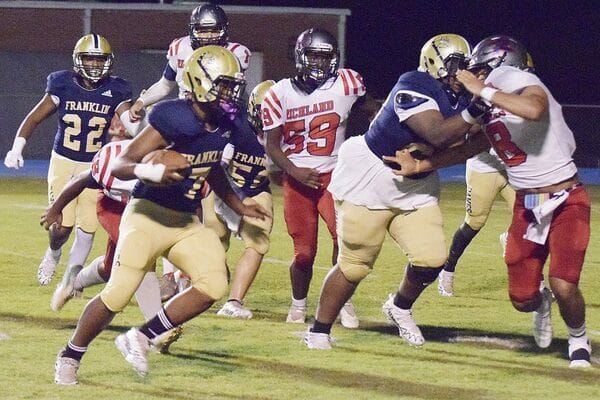 To see more than 150 pictures from the Franklin County vs. Richland football game on Friday, Sept. 15, visit our dotPhoto link at https://www.dotphoto.com/go.asp?l=franklinadvocate&AID=6843586&T=1

Franklin County’s varsity football team found the end zone three times in the first half of last Friday’s contest against the Richland Rangers.

That effort proved to be enough to hang on down the stretch for a 19-7 Bulldogs’ victory at Louie Mullins Memorial Stadium in Meadville.

“I’m glad we were able to score 19 points in the first half, but I’m not happy that we didn’t score after halftime, and we’re a better team than that,” FCHS Head Football Coach B.J. Smithhart said after the game.

“We’re going to work to get our stuff together because we know we’ll face a very athletic team in Amite County next. That means we’re going to have to take care of business on both offense and defense and play better than we did.”

“Still, we had some guys step up for us, and that was a real positive, but we’ve got to produce as a team and make certain we focus on the business at hand as we try to get better. Things really don’t get easier from here, and we’ve got a lot of talent on this team. We all just have to be on the same page.”

Franklin County, which improved to 3-1 on the season after the win, combined for 297 yards on offense — 157 of those coming on 36 carries while another 140 yards resulted from an 8-18-2 passing effort by Bulldogs’ quarterback Quez Rancifer.

The Dawgs’ ground attack was paced by Keyundre Felton, who led all backs with 64 yards on 11 carries, and Tyrese O’Neal gained 30 yards after taking seven handoffs in the game.

Others taking turns carrying the ball included Moore, who had three totes for 25 yards, Jailon Brown with 15 yards on seven rushes and Rancifer called his own number four times for 12 yards.

Both teams struggled to start the contest as Franklin County turned the ball over on an interception — picked off by Richland’s Caleb Brown — on the Bulldogs’ initial offensive drive, and the Rangers coughed up the football on a third-down fumble that was picked up by Felton at the Rangers’ 27 yard line.

On the subsequent offensive series, Franklin County drove as deep as the 4 yard line as the Richland defense stiffened and the effort died on a four-down pass incompletion.

Richland fumbled again on its follow-up series with Baker coming up with the football near the 2 yard line with 2:51 remaining in the first quarter.

From there, Rancifer put the football in Moore’s hands and he scampered into the end zone for the game’s first score.

Bulldogs’ kicker Dallas Broom put the ball through the uprights for the point-after try and helped push FC out to a 7-0 lead.

Franklin County was able to string together two more scoring drives just before the mid-game break — the first of which came on a six-play series that saw Felton and O’Neal move the ball from the Rangers’ 23 to the 14 on a trio of carries.

On fourth down, Rancifer threw a pass toward the goal line, but Richland was called for pass interference to give the Dawgs a new set of downs near the 8 yard line.

Rancifer went to the air again and hit Baker for a three-yard gain around the Richland 5 before a holding call backed Franklin County up to around the 16.

Now, facing second and goal, Rancifer hit Moore in stride for a touchdown with 2:46 left before intermission.

The Broom point-after try was blocked by the Rangers’ defense, but FC had opened a 13-0 bulge.

The Bulldogs found the end zone one more time with 20 ticks left on the clock in the first half — thanks to a four-snap series in which Rancifer hit Moore twice.

The duo’s first connection gained 34 yards and their last was a 31-yard strike with Moore collecting his third touchdown of the affair.

Broom’s follow-up PAT was unsuccessful and Franklin County took a 19-0 lead into the locker room.

The Rangers managed two snaps in the last 10 seconds of the half — with a pass falling incomplete and Baker picking off a throw for the Dawgs as the horn sounded for intermission.

Richland took the second half kickoff, though, and put together a seven-play, three-minute drive that saw the Rangers’ B.J. Morrow race in from six yards out for his team’s lone score on the night.

Jaylen Williams added the PAT to cut into FC’s lead, 19-7.

The Bulldogs’ offense had four series in the second half, but could not score on any of those.

The FC defense, though, had some big stops late that stymied Richland’s comeback bid.

This was certainly evident on a Rangers’ drive that started near midfield at the end of the third quarter and got as deep as the Bulldogs’ 1.

Richland fumbled on first down and lost eight yards before the Dawgs’ defense made stops for back-to-back losses — including a six-yard setback on a Felton sack of the quarterback — that drove the Rangers back to the 20.

Facing a fourth-and-goal situation, the Rangers opted to go to the air and the drive died on an incomplete pass.

FC played clock management late and was able to put together a four-plus minutes drive to preserve the win.

Remontae Cameron and O’Neal combined for five take-downs each for the Bulldogs.

Felton had a sack and Baker was credited with two interceptions. The same two players also combined for a fumble recovery each in the outing.

Franklin County is slated to host Amite County on Friday, Sept. 23 — which will also be the Bulldogs’ annual homecoming celebration.

Grateful community says thanks to veterans

Voter turnout was bit better than expected for ...