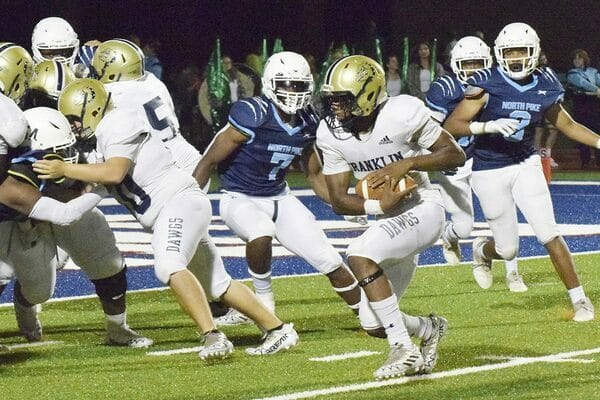 In the end, the visiting Bulldogs, now sporting a 2-1 mark on the season, came up on the short end of a 36-16 decision to the Jaguars, who improved to 1-2 with the victory.

“We have to do a better job of stopping big plays and not allowing our opponents to jump out to a lead on us,” FCHS Head Football Coach B.J. Smithhart said at the end of the game.

“The challenge will be to learn what we can from this one and put it behind us. Our goal — win or lose — is to get better every time we take the field, and there’s a lot we can do in that regard. I think we also have to improve in our ability to work together as a team and not get down on ourselves when we have some adversity.”

The Bulldogs managed 42 yards of rushing on 27 carries — an average of 1.55 yards per tote — while gaining 34 yards through the airways on a 4-10-1 effort led by quarterback Quez Rancifer.

While the Bulldogs struggled through most of the contest, one area that was truly above average was on special teams where Donovan Moore brought back a trio of Jaguars’ kickoffs for a combined 93 yards.

He also had a punt return for 44 yards in the game that led to one of FC’s touchdowns.

North Pike accounted for 226 all-purpose yards on offense with 118 of those coming on the ground thanks to 38 carries.

North Pike took the opening kickoff and started a six-play drive that was spurred by three offsides penalties by the Bulldogs’ defense, which tried to anticipate the Jaguars’ snap count.

Jaguars’ kicker Ty Jones split the uprights to push North Pike out to a 7-0 lead.

FC’s initial offensive drive showed some early promise as Rancifer hit Moore on a 13-yard completion, but the drive died when the Dawgs were flagged for a false start and then coughed up the ball with North Pike recovering the fumble near Franklin’s 29 yard line.

The Jags had their own troubles to start the next series after being tagged on a delay of game call followed by a false start.

FC’s defense was called on two more offsides penalties before North Pike began moving the ball — most notably an 11-yard pass completion that set up a first-and-goal scenario from the Bulldogs’ 3 yard line.

From there, North Pike’s Demontre Kingdom lurched in for the score with 4:15 showing on the clock in the first frame, and Jones’ kick was true in allowing the Jaguars to open a 14-0 bulge over Franklin County.

The Bulldogs had a pair of lackluster offensive drives to end the first quarter and to start the second quarter before North Pike began a seven-play series with 9:55 left before the half.

This particular drive was boosted by a personal foul call against FC that moved the ball to the 10 yard line.

NP’s Jakevious Smith ran in the touchdown at the 6:31 mark and Jones’ successful kick moved the Jaguars out to a 21-0 advantage.

In one of its longest drives of the night, Franklin County got the ball at its own 35 and methodically began marching down the field.

The Jaguars were called on a personal foul that helped put the ball on the North Pike 24.

The series sputtered on a pair of incomplete passes, a fumble that resulted in a seven-yard loss and then a fourth-down interception reeled in by North Pike’s Jarvis Smith.

The Jaguars took over at their own 10 yard line, but quickly went three-and-out before punting the ball away with less than a minute left in the first half.

Moore caught the ball and returned it 44 yards to give Franklin County a first-and-goal situation at the North Pike 1 yard line.

From there, Rancifer handed off to Keyundre Felton, who raced in for the score with 26 ticks left on the clock.

Following penalties on both teams during the point-after try, FC went for two and Rancifer found his way in to put two more points on the board.

Trailing 21-8 to start the second half, FC had possession of the ball and saw limited success in moving it into Jaguars’ territory.

From there, North Pike took over and put together a clock-draining, 13-play drive that was successfully capped thanks to a 21-yard completion from McDowell to David Ard for a touchdown with 44 seconds remaining in the third.

McDowell found Ard on a follow-up two-point conversion pass to give the Jaguars a 29-8 lead.

Franklin County’s Larry Pernell had one of the most memorable plays of the night with 9:38 remaining in the fourth quarter — that’s when the Bulldogs blocked a North Pike punt and he ultimately returned the ball 50 yards for a touchdown.

The Jaguars’ scored again on a four-minute, six-play drive where Elijah Smith punched the ball in from a yard out with 5:56 left to play in the game.

Jones’ post-touchdown kick was good and that set the final margin of victory in the contest for North Pike at 36-16.

In addition, Jailon Brown rushed three times for six yards and Xavier Rankin had one tote for three yards.

Rancifer connected three times through the air with Moore in the game for 26 yards and hit Reshon Baker once for eight yards.

Rankin made his presence felt on defense with a monstrous performance that resulted in a team-high 13 tackles while Pernell recorded an impressive 11 take-downs for the Bulldogs.

The Bulldogs return to Louie Mullins Memorial Stadium in Meadville on Friday, Sept. 16 to face off against the Richland Rangers in a contest slated to kick off at 7:30 p.m.

This will mark the beginning of a three week home tilt for Franklin County.