Water quality issues raised during Meadville Board of Aldermen session 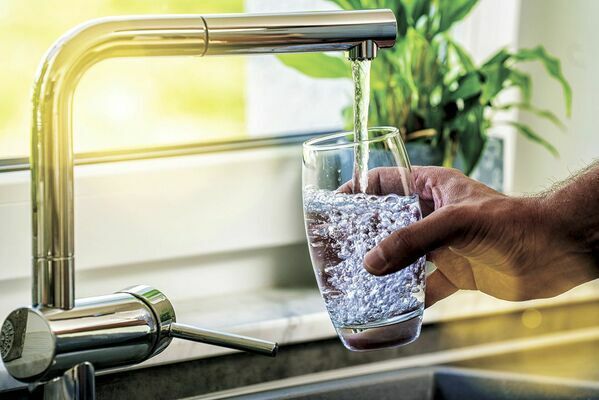 A Meadville resident questioned the quality of water being provided to customers in the Franklin County seat and asked for documentation outlining what is being done to offer the best water service possible.

Meadville resident Randy Youngblood spoke to the town’s board of aldermen during the panel’s monthly business meeting on Tuesday, Nov. 9 regarding concerns he has about drinking water quality.

“After the last change I made in my whole-house (water) filtration system, I just felt I had to come and show you what that looks like,” Youngblood said while showing those used filters.

“When I removed this after just four days less than two months of filtering my house, I could run my hand down the outside of the filter and sludge was there. I’ve gone from replacing my filters every six months to every four month sand now to less than two months.”

Alderman Charles Calcote asked Youngblood exactly where the filters he demonstrated were located at his home, and the resident replied it was near where the town’s water supply enters his home.

“All of the water in the house is going through it,” Youngblood said of his filters. “What I’m seeing is that they are brown in color less than 48 hours after I put them in.”

Youngblood went on to note he understands the town has issues with an aging water distribution system and that efforts are being made by municipal leaders to address those concerns.

“I am not alone in wondering (about) this much ‘stuff’ in my pipes and is it harmful ... is it safe ... and what are the ongoing efforts to resolve it?”

• A record of water system flushes done, by location, during the past year.

• Results of safety-quality tests for the system completed during the past year.

• An explanation of the process by which the public is advised of boil water notices.

• Documentation of boil water notices that have been issued in the past year.

“Why am I doing this?” Youngblood continued. “Communication is the key to understanding and supporting (the issues). I see this as a benchmark of where we are now with the recommendations.

“As we come back across time, we can be looking at data that we can understand and to show that we are making progress.”

Board members were handed copies of Youngblood’s request letter and the panel made no further comment on the presentation during the remainder of the session.

In other action during the meeting, the Meadville Board of Aldermen:

• Accepted the low bid of Warren and Warren Paving for the milling and resurfacing of Main Street between Walnut and Edison streets, which is being funded through a Small Municipalities and Limited Population Counties grant through the Mississippi Development Authority.

The grant, which totaled just shy of $150,000, was awarded to Meadville for the public infrastructure project and will also provide for some contingency dollars for any underground drainage repairs that might be needed.

Mayor Lane B. Reed said he anticipated the road work, which will involve at least two blocks, will start after the new year and as weather conditions permit.

• Discussed plans for sewer upgrades along Fourth Street after meeting with municipal engineers, and put the scope of work out for bids to potential contractors.

Reed indicated some of the funds for the project will come through federal coronavirus mitigation funds in the American Rescue Plan along with town proceeds from the state’s internet sales tax.

• Accepted a donation in the amount of $600 and amended the municipal budget to reflect the gift that will help to defray the cost of signage placed in conjunction with existing Franklin Chess Center signs along the highway entrances to town.

• Voted to advertise to sell the town’s old police car, which was replaced earlier this year with a newer vehicle.

• Heard a report on the town’s infrastructure indebtedness as of November — with $17,302.96 remaining on a Mississippi Department of Environmental Quality sewer loan and $79,507.55 outstanding on a United States Department of Agriculture water tank loan.

• Briefly discussed a draft letter to lawmakers, on behalf of the town, outlining the municipality’s infrastructure needs with the assistance of federal and state funding sources.

• Town Clerk Leslie Thompson reported there were 12 customers on the past due utilities cut-off list, and noted there was one customer water deposit refund during the past month in the amount of $44.22.

• The police department reported a number of citations were issued and arrests made during the past month along with a few motor vehicle accidents.

• The fire department reported at least two instances where fire alarms were set off by children and discussed work to rehabilitate the town’s brush truck, which should be finished in late November or by the end of the year.

The Meadville Board of Aldermen will hold its next business session at 5:30 p.m., Tuesday, Dec. 14 at town hall on Main Street. The meeting is open to the public.