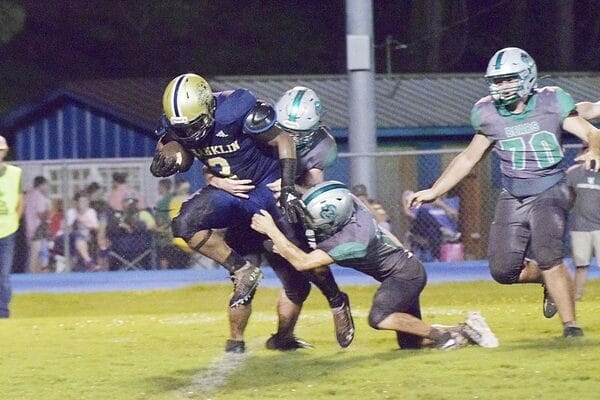 FOR FC FOOTBALL GAME PHOTOS, GO TO THIS LINK:  https://www.dotphoto.com/go.asp?l=franklinadvocate&AID=6843066&T=1

The regular season opener for Franklin County's varsity football team turned out to be soggy — an understatement if there's ever been one.

In a game that was originally scheduled to be played at West Lincoln on Friday night, this week's monsoon weather pattern forced the contest to be relocated to Louie Mullins Memorial Stadium in Meadville after the Bears' home field proved to be unplayable.

FC's field conditions turned out to be only slightly better in leading to a combined 15 fumbles for the two programs. Despite the climate, the Bulldogs manhandled the visiting team by a 41-7 margin to improve to 1-0 on the new gridiron campaign.
"I thought our kids played hard and was glad that we had the opportunity to get a lot of them some playing time," Franklin County Head Football Coach B.J. Smithhart said after the game. "The conditions were pretty slippery out there, but we did some things that gave us chances to score … especially in the early going. We also had a lot of penalties that especially hurt us when they resulted in touchdowns being called back."

The Bulldogs combined for an impressive 231 yards on the ground thanks to 30 carries with a 3-12-0 passing performance for 85 yards. The Bears gained only 19 yards on 27 totes and had 1 receiving yard on a 1-3-1 airways performance.

Franklin County set the pace of the game early thanks to a five-play opening offensive series that was bookended with a 29-yard pass completion between quarterback Quez Rancifer and receiver Donovan Moore from midfield and ended when Rancifer struck receiver Reshon Baker on a 17-yard touchdown pass with 6:09 remaining in the first quarter.

The drive was successful despite the Dawgs being called on a block in the back penalty during the punt return and a holding call on the second snap of FC's first offensive series.

Kicker Dakota Chisolm's point-after try was no good, but FC had opened a 6-0 advantage over the visiting Bears.

The Bulldogs scored again on its next drive with a pair of backs — Keyundre Felton and Tyrese O'Neal — along with Baker making significant gains on the wet turf. The series concluded when Felton exploded for a 12-yard touchdown run with 57 seconds remaining in the initial frame.
Chisolm split the uprights to lift Franklin County to a 13-0 lead.
FC added some scoring insurance before intermission thanks to another timely five-play drive with less than six minutes showing on the clock — even though the series looked doomed from the start.

The Dawgs had two incompletions and a one-yard rushing loss to bring up a fourth and 11 from near midfield. Rancifer unleased a bomb downfield to Baker, who made his way into the end zone. Unfortunately, the play was called back on an illegal block by FC.

The spot infraction brought the ball back to the West Lincoln 47 for a fourth-and-seven scenario. Rancifer went to the air again and hit Moore in stride for a 39-yard strike to move the chains to the Bears' 7. From there, Rancifer called his own number and raced in for the score with 4:30 left to play in the first half.

Kicker Dalton Broom punched in the point-after kick to build a 20-0 advantage that would carry over into halftime.

The Bulldogs pretty much iced the game to start the third quarter with the squad scoring twice within a 14-second window.

The first touchdown came on a one-play, 83 yard run by O'Neal followed by a Chisolm extra point, and the other was served up by Ja Norman, who picked off a West Lincoln pass and returned it 37 yards for the score and then Broom booted the kick to open a 34-0 bulge over the Bears.

FC's Xavier Rankin put his name on the tally sheet thanks to a 22-yard run for another touchdown with 6:37 left to play in the third frame. Chisolm's point-after kick gave the Dawgs a 41-0 lead and the opportunity for Smithhart to begin substituting liberally down the stretch.

West Lincoln was able to put a cosmetic touchdown on the scoreboard with 3:20 left to play in the game when the Bears recovered a Franklin County fumble in the end zone and tacked on the point-after kick.

FC dominated some of the game's statistical categories with 11 first downs while converting an impressive 3-of-4 fourth down opportunities. The Dawgs failed to covert any of its third down chances and never punted in the contest. The Dawgs' defense helped limit West Lincoln to a paltry three first downs with the Bears punting four times for a 37 yard average.

Offensively, Franklin's O'Neal cracked the century mark in rushing with 101 yards on three totes and Rancifer was 3-12-0 passing for 85 yards.

Peyton Touchstone had a stellar night on defense with a team-high six tackles and a sack while Larry Pernell had five take downs and a fumble recovery and Zy Cole recorded four tackles and had a sack.

The Bulldogs will return to action on Friday, Sept. 2 with another home game — this time against Wesson Attendance Center. Kickoff at Louie Mullins Memorial Stadium will be at 7:30 p.m.

"We know the Wesson team we'll face is strong and is well coached," Smithhart said. "I hope that we can carry some momentum out of this game and that our guys will play hard to give us opportunities to make good things happen."

Stats by Trey Hill, Lane B. Reed and Sean Dunlap