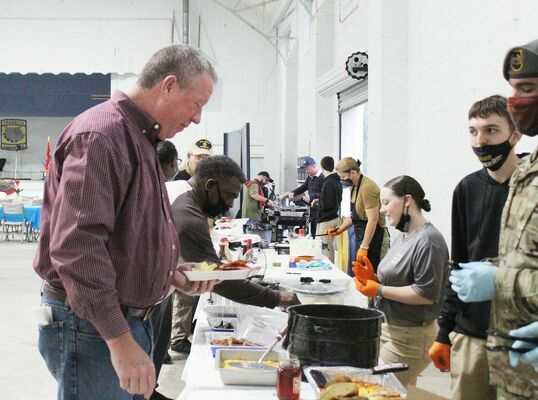 Franklin County High School’s Junior ROTC hosted a Veteran’s Day breakfast gathering on Thursday, Nov. 11 to honor and show support for those in the community who served in the Armed Forces.

“This was a student-led initiative, which makes us extremely proud to know our students care enough about veterans to do something like this — with some guidance from us, of course,” retired Col. Lynn Pippin, who serves as a JROTC instructor, said.

“One of the pillars of our program is to promote patriotism, so it thrills us to see the students put something like this together. I think it’s important to pass on the love of country to the next generation … to let young people see that others have come before them and have been willing to sacrifice whatever it took to preserve freedom.”

Cadet Harley Ziegler said planning the breakfast was truly a group effort that grew to include community members, as well.

“We had a certain few cadets in charge of (the event),” she said. “We all gathered together to plan it, it wasn’t specifically one cadet, (though) we did have one cadet — Savannah Cothren — come up with the idea.

“She shared her idea and expressed her passion to want to do this with everyone else.

“We’re all a family in ROTC. We support one another and when we heard her idea we fell in love with it (and) we made it happen. We reached out to each other within our battalion and in the community, and we’ve had other people in and out of the battalion and families come and bring food and gifts and little door prizes to support everyone.

“Today, honestly, is about showing our love for the veterans who have served our country, but also it’s sort of like our community coming together to support these veterans, as well. I think that’s really a big bonus for us. We did something that everyone got involved in – not just our battalion, but the community could be involved, too.”

While those in attendance dined, Pippen spoke to the veterans about the importance of telling their stories to the younger generation so they could learn about the sacrifice it takes to serve their country and to preserve freedom.

Following his remarks, a fallen comrade ceremony was conducted by Cothren along with other students in the battalion.

The ceremony honored those who gave the ultimate sacrifice for freedom.

After the ceremony, door prizes were given out. The door prizes were donated by students, teachers and community members and included handmade pens, jelly, a cutting board and a wooden likeness of the American flag.