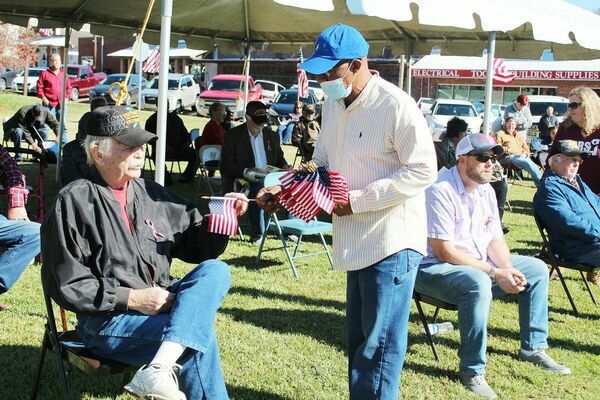 Veterans and their families from across Franklin County — and some from out of state — came together for a commemoration program in Bude Saturday, Nov. 13 honoring those who have served in the Armed Forces.

The program opened with prayer by Brother Marvin Howard, who served as emcee for the program with the National Anthem sung by Evelyn Higgins.

Linda Green, who serves as Bude’s mayor, welcomed everyone to the program and expressed her gratitude for the veterans’ service.

“Today we come to honor and recognize American servicemen, past and present,” she said.

“Veterans, you have done your duty to your family, to your community, to your fallen comrades and to your country. You have honorably served your nation with great distinction, and we can never say (thank you) enough for your service in war and in peace. Again, this event is a celebration to honor American veterans for their patriotism, love of country and willingness to serve.”

The Pride of Franklin County Band performed and Franklin County’s Veteran Service Officer Grady Fleming paid tribute to veterans and gave some information about his job.

“As veterans, each one of you signed a sheet of paper saying, ‘Yes, I will serve,’” he began.

“Some of us had the opportunity — or misfortune — to be sent overseas during wartime. Some of you came back injured … physically, mentally, emotionally. But I believe that all of you, if our country really needed you, even today, you would step up and say, ‘Where do I sign?’

“The families of veterans have given a lot during their time. Some are still suffering because of their veteran suffering. Some went to war and never came back.

“A lot of our veterans are National Guard veterans. The government looks at things differently than we do. I’ve had people come in my office and say ‘I’m not really a veteran, I was in the National Guard.’

“Somewhere written on a sheet of paper the government wrote, it might say that. As for me, my belief is that you also signed that paper. If you put on a uniform for the United States of America, the land we all love, in my eyes you’re a veteran. I’ll do whatever I can to help you.”

In closing his remarks, Fleming went on to express his thankfulness for the recent generations of veterans who, in the absence of a draft, willingly signed up to serve their country.

Danny Cameron and Deacon Charles Ramsey from the Rose Hill Baptist Church Veterans Outreach Ministry gave each of the veterans present a flag and drew tickets for several door prizes.

Veterans were given the opportunity to speak, and several did so.

Franklin County resident Edward Foster told of his experience in the Navy.

“I was born and raised right here in this place, and had never been (any) further than Sicily Island, La., before I joined the Navy,” he said.

“I joined in New Orleans and the first big plane I ever saw I rode it to San Diego. I went from there in May, I got on a ship to Hunter’s Point in San Francisco, stayed about seven months, came back at the end of 1955, (and) went to the Far East in ’56. I was 20 years old.

“(I) came back, and they designated us from a CVA to a CVS, anti-submarine warfare. We took off in the early part of ’57, went around South America to Boston. I spent my 21st birthday in Lima, Peru.

“When I went to the Far East, I went to a lot of places. I (saw) a lot of things. I got to Boston in April of ’57, from there we went to the Arctic Circle, down to Cuba and up and down.

“I’ve been overseas four different times. I’ve been in 16 of the 24 time zones, and I’ve been in 32 states. I spent 32-and-a-half months on an aircraft carrier, and my job was in the radio division.

“I’ve been many, many places, and God took care of me all the way.”

Beard, who was born and raised in Houston, Texas, but has lived in Franklin County for many years, also spoke.

“One thing I don’t regret doing was spending time in the Navy,” he said.

“I was in the Persian Gulf on the U.S.S. Independence, which was a bird farm – a conventional type bird (aircraft) farm. We actually used oil instead of nuclear power. We were over there during the Iranian crisis when they were turned loose.

“The biggest thing I remember was not getting any sleep for 72 hours prior to President Reagan doing his inaugural address. And we had spent those 72 hours trying to get all the birds that fly in the air and armed.

“They took off that morning, headed for Iran. And when the president finished his address we found out that the hostages were on a plane headed home.

“That’s the biggest thing I remember about being over there. The rest of it was just nothing but water – and lots of it. We were out there for 249 days, I believe, without ever seeing land. I think that’s the longest anybody’s ever been at sea that period of time.

“We were out there so long, in fact, they actually served beer for the first time in 200 years in the United States Navy. We got two beers each. That’s the first time an alcoholic beverage had ever been served in the Navy, and we were one of the first ships to get it. That was a surprise.”

Spencer Walker of Houston, who served in the Marines and has family ties in Franklin County, told some of his story.

“Other than Jesus and my beautiful wife and kids, I love the Marine Corp,” he said.

“I’m not going to tell war stories, but I spent a good bit of time in Iraq and blew a lot of stuff up. I came home a broken man, in a dark place, for 12 years. Hard drinking, living life in the fast lane … I’ve been in more county jails than you can shake a stick at.

“I have been to the psych ward at the Houston VA Medical Center for 30 days at a time. I’ve been in jail for months at a time. But God’s grace was sufficient.

“He allowed me to break, surrendering my will over to Jesus Christ, allowing me to get into veteran’s treatment court and allowed the mayor of Houston to hire me to oversee mentoring for three courts with 150 combat vets.

“I enjoyed my time in the Air Force. I loved it very much, but it was the last thing on my mind, actually. Of course, I wanted to be mayor of Meadville, but, you know, that’s a second thought,” he laughed.

“To all of y’all that came out today to show us some appreciation, this is really the first time out of 20 something years that I’ve been home that I’ve even thought about coming to a celebration for veterans.

“Meadville is my home. I’m born and raised here, grew up in Franklin County. I did my time in service, I recruited. I never forced any of my children to join the service. All I wanted them to do was just get an education. Which, my dad, all he wanted me to do was to graduate from high school.

“But I’m very grateful for your love today, and I hope God continues to bless each and every one of you.”

The program concluded with music by Gayle Collins, Crossway, Larry Wallace and the playing of Taps by Willie Buckels.

Free jambalaya plates from Sullivan’s Kitchen in Meadville were handed out to the veterans.

The Bude Committee was responsible for putting together the observance and the Bude Community Foundation volunteered to assist with hosting the event.

Pastor Will Lott of Bude Church of God provided and operated the sound equipment and the stage was provided by Home Hardware in Bude.

Franklin Telephone Co., provided a tent for the veterans to sit under during the program, which was held outdoors on Railroad Avenue at Main Street.