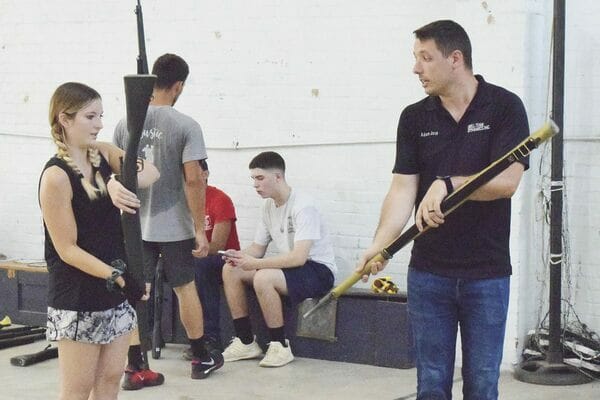 After making a solid showing at national drill competition during the previous school year, Franklin County High School’s Junior Reserve Officers’ Training Corps is working to build on its successes to take that program to the next level.

Prior to the start of the new school term last week, cadets joined with instructors Col. Lynn Pippen and Sgt. First Class Marjorie De La Garza at the Armory building in Meadville for a summer camp designed to hone their skills and set the training tempo for the year ahead.
“We did our first summer camp last year with Petal High School — by their invitation — and met Adam Jeup, a drill consultant who works with programs across the country, and formed a relationship with him during the last school year,” Pippen said.

“This is our first camp on our own, and we believe it will help us as we reach for our goals during the new school year.”

On a personal note, De La Garza said she gained a great deal from last year’s camp and hoped to roll a lot of that knowledge over into this year’s training initiative.

“I learned a lot watching the Petal High School coach, who led that team to the state championships several years in a row,” she said. “As a coach, I learned as much as the kids did in Petal, and we’re expanding that here to our program as we try to get better.”

She noted the FCHS JROTC program lost a large number of seniors to graduation, and said training to start the new school year will hopefully set the bar high for the latest crop of cadets.

Pippen said the local JROTC program finished, on average, No. 19 in the nation in drill team competition last year in Florida.

Now, attention is turning toward cracking the top 10 in that event.

“There’s no way to predict what can happen along the way, but our goal is to perform well at state — where we hope to be competitive in everything we do — and advance again to nationals,” he noted.

Going to competition is a milestone in its own right, but De La Garza said it requires a special breed of students to take part in the intensive and specialized training JROTC offers.

“It takes a lot for youth — especially teenagers — who are prone to be inside and get them motivated to be outside and work,” she said.

“But this group of cadets is different from the norm we see in this generation. They have the drive to be here before school starts, after school and for everything we ask them to do.

“They have to want it bad enough to make a commitment to do something like this because of the sacrifices its takes. I’m proud to say our kids have displayed that desire to be their best over and over again.”

In addition, Pippen said the determination shown by FCHS cadets is a testament to and a direct reflection on the parents, families and community and the support they give to these young people in his charge.

“There were parents or loved ones that could have done other things than bring their son or daughter to camp, but they made the commitment to do so,” Pippen said.

“That means a lot to us and will hopefully help solidify the family unit on top of what it does for our team.”

Jeup, who is affiliated with Drill Dojo and visited from Tampa, Fla., worked with FC cadets on techniques in holding and using their rifles effectively as part of JROTC drill demonstrations.

“A lot of my time here was working with them on the basics and techniques that they can build off of,” Jeup said. “I was very pleased with the commitment shown by these students, and feel like they have a great work ethic in wanting to improve themselves and the program.”

Both Pippen and De La Garza characterized the JROTC’s recent summer camp as similar to what programs like football and band do with workouts designed to build individual and team skills.

“Doing this is in line with one of the sayings we go by — ‘average is over,’” Pippen said.

“As we take this program to new heights and grow our expectations, there will be more emphasis on doing those things that will set us apart.

“The JROTC is building something that will hopefully continue to mold and shape young men and women to be their best in whatever life holds for them.”