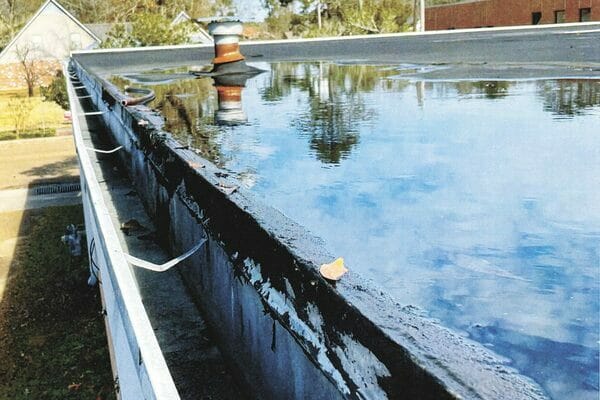 After more than a year of lengthy discussions and then construction, the Mississippi State Extension Service’s Franklin County office building finally has its highly anticipated new roof in place.

At its first business meeting of August, the Franklin County Board of Supervisors signed a certificate of substantial completion stating the work was finished.

The county-owned building, at the corner of Walnut and Main streets in downtown Meadville, had a history of roofing leaks, exacerbated by incorrectly placed flashing along with low spots on the flat surface that held a great deal of water after each rainfall.

Water from the roof leaked through and caused damage to the ceiling tiles, walls and floor in the Extension Service headquarters as well as the Franklin County Museum, which is also housed in the building.

The board initially contracted with Independent Roofing on Dec. 20, 2021, to take on the project. At the July 5 board meeting, it was reported that rotten wood had been found as the company began the process of attaching gutters to the building.

As of Aug. 1, all known issues with the roof were resolved and a new roof was in place.

After a change order, which removed the cost of an unused contingency allowance and coverboard credit in the amount of $6,100, the total cost of the roofing project came in at $80,740.

The board also heard from resident Nolan Bass concerning Taylor Street in Roxie.

Bass questioned if the county could take over maintenance of the road, which was formerly a county road, but was annexed by the Town of Roxie several years ago.

Board attorney Morgan Halford-Poore, who also serves as board attorney for the Town of Roxie, said she would talk to the Roxie Board of Aldermen about using town funds held by the county to service the road, with county workers doing the work.

In other action at the meeting, supervisors:

• Held a public hearing to allow anyone with objections to the 2022 land and personal tax rolls to bring them before the board.

Tax Assessor-Collector Talina King Matthews brought several objections filed with her office to the meeting and no one present had any changes to the rolls.

The board approved the 2022 tax rolls with the changes which were brought to their attention.

• Accepted the Franklin County School District’s budget for the 2022-2023 fiscal year as presented.

The school district did not seek an increase in funding from ad valorem taxes, but did request $39,936 more than last year in relation to new growth tax revenue.

• Approved reimbursing Tonya Blackwell in the amount of $13.32 for having keys made for a new employee in the chancery clerk’s office.

• Gave approval to transfer Assets No. 1906 and 1295 — which is radio equipment that was used by former Franklin County Coroner Percy Peeler — to the sheriff’s department.

• Accepted proofs of publication from and approved payment of claims to The Franklin Advocate in the amounts of $885 for a contractor permit resolution notice, $153 for a land redemptions notice and $65.26 for a land roll notice.

• Voted to allow District 5 Supervisor and Board President Jimmie “Bodi” Bass to sign a letter to Halford Law Firm as requested by the State Audit Department in regards to any litigation occurring from Sept. 30, 2021, until the present.

• Signed papers regarding an NRCS project to be done on Tennessee Street in Roxie.

The next regular business meeting of the Franklin County Board of Supervisors will take place at 9 a.m., Monday, Aug. 15 at the courthouse in Meadville.