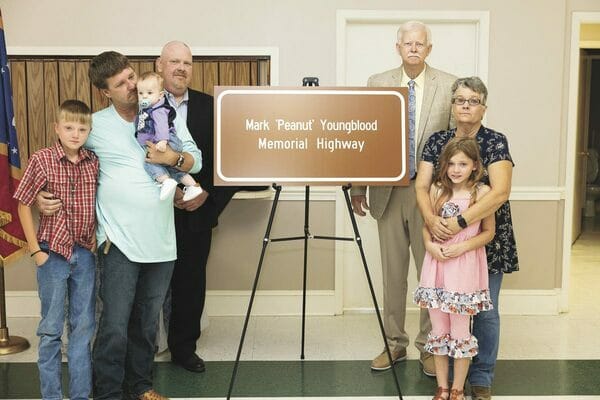 A Franklin Countian who lost his life almost three years ago while mowing a section of highway right of way was recognized on Friday, July 22 by having a portion of U.S. Highway 84 named in his honor.

The 57-year-old Youngblood, who served as a maintenance technician with MDOT’s Bude office, died in a Sept. 24, 2019, mishap while cutting roadside grass in rural Franklin County. His tractor reportedly rolled over in the incident.

King noted Youngblood enjoyed serving others, was an important part and beloved member of the community and the highway designation in his memory was a fitting honor.

“It’s a tragedy each time we lose an MDOT employee, and it’s especially tragic when that loss of life occurs on the job,” King went on to say. “When one member of the MDOT family passes, we all mourn. We’re proud to honor his legacy today by dedicating a section of highway to him.”

King said it felt appropriate for the signage honoring Youngblood to be placed along the major east-west corridor where people who knew him or did not know him could see the lasting testament to his service.

“I hope it will remind (motorists) of what a good man he was, what a servant he was to MDOT and what a good employee — a great employee — he was,” King added.

Albert White, who serves as MDOT’s District 7 Engineer, said Youngblood might have been a bit embarrassed by the attention from the ceremonies because he was a humble man.

“He didn’t like attention,” White said. “I think he’s like anyone who’s a follower of Christ. If you know you can help someone else by your life and what you do in your life, he would have been happy because something good came of it. So hopefully this (dedication) is a reminder and will save other lives out there on the road.”

Shelby Smith, who is Youngblood’s granddaughter, said the service was very important for the entire family as it still works to deal with aftermath of his passing.
“Today’s dedication means a lot to me,” Smith said.

“It shows the community actually cares about the loss of people’s loved ones. And, let’s just say I traveled all the way from Texas just to be here to watch the dedication and all the speakers. It touched my heart.”

Youngblood, a native of Sulphur, La., and resident of Roxie, was born to William “Bill” Franklin Youngblood and Pauline Denlinger Youngblood on Jan. 27, 1962.

He was called a dedicated, well-known, fun-loving and faithful worker whose career outside of MDOT also involved pursuits in the oil, lumber, steel and gaming sectors through the years.

Youngblood also played a role in touching people’s lives in the community through his involvement in Roxie Baptist Church where he assisted those in need — especially the elderly — with chores and other work that required attention.

Other previously dedicated roadways locally include:

• The M.C. “Bully” Calcote Memorial Highway, named for a Mississippi senator and representative from Franklin County, which includes U.S. Highway 84 and Mississippi Highway 184.

• The D.P. Butler Sr., Memorial Highway, named for a Mississippi senator and representative from Franklin County, along U.S. Highway 98.

• The Mississippi Highway Patrol Officer George D. “Danny” Nash Memorial Highway along U.S. 84 west of Meadville.
Nash was shot and killed during a traffic stop he conducted on Feb. 4, 1983.