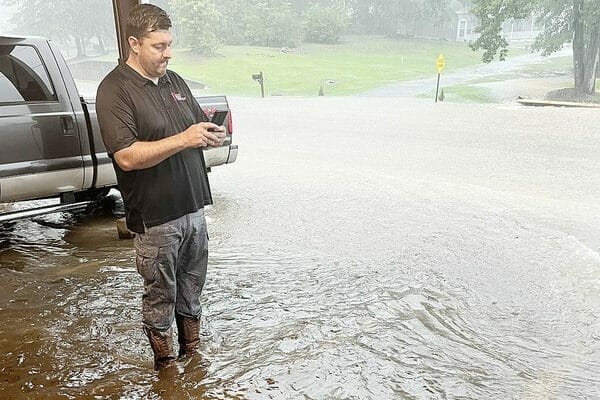 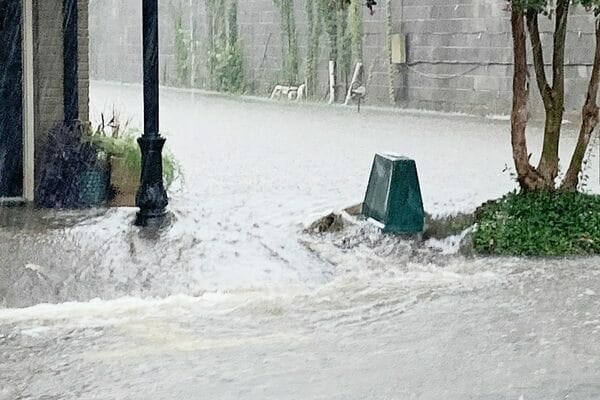 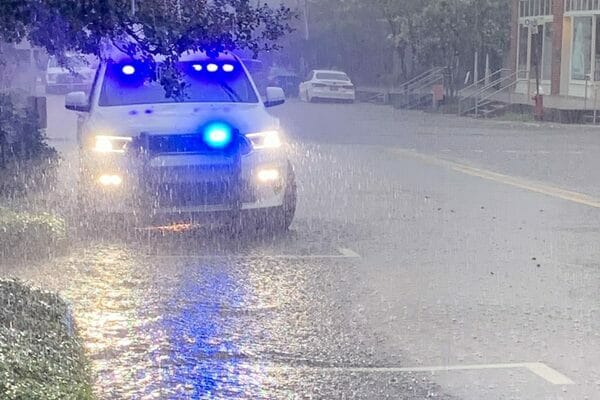 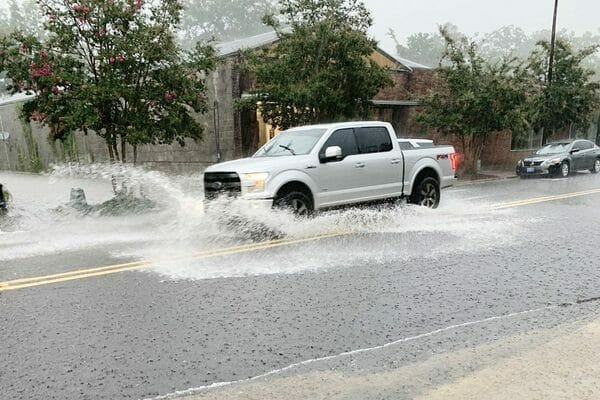 A truck splashes its way along Main Street in downtown Meadville on Thursday, June 30 as torrential rains flooded roads and businesses in the area. Photo by Sean Dunlap/Franklin Advocate 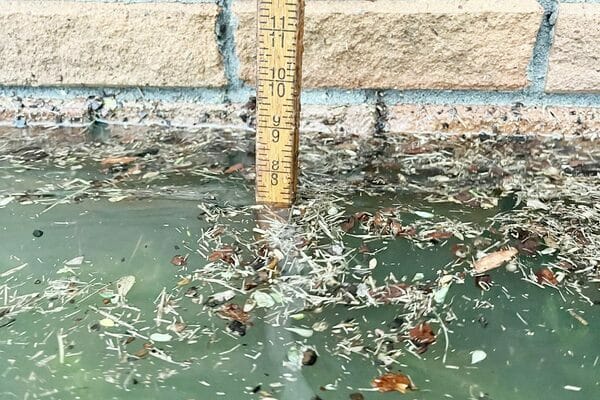 Staffers at Rural Rapid Response ambulance service in downtown Meadville used a measuring stick to show how deep the water got on Thursday, June 30 at their location on the corner of Walnut and Second streets.
Previous Next

Eight days after a mid-afternoon thunderstorm caused wind damage across parts of Meadville, another powerful thunderstorm -- this time packing torrential rains -- struck around 4 p.m., Thursday, June 30 and caused widespread flooding of buildings and streets throughout the historic downtown area.

At the height of the storm, stormwater runoff became too much for curbside drains to handle and portions of Main Street between Edison and Walnut streets as well as Walnut Street from Main to Second Street literally became swamped. In addition, water cascaded toward the center of town and overran sidewalks along the north side of Main Street.

Meanwhile, the offices of Rural Rapid Response ambulance service at the corner of Walnut and Second streets took on between six and eight inches of water.

RRR owner Tyler Blalock said flood waters rolled under doors and flooded his office's kitchen, bathrooms and an area where staff rests during their shifts. Those present when the flooding started hurriedly removed items from the floor in hopes of preventing them from being damaged.

"It was one of the worst incidents that we've had in terms of flooding," Blalock said. "We tried to keep the water out, but it was coming with such force that it was impossible to keep in from coming in the building."

One video made by those at RRR showed waters rushing over the threshold of a door carrying debris into the building.

Justin Lloyd said he frantically worked with a push broom to try to divert the floodwater from making its way inside RRR's offices, but it was a situation where there was more water than could be handled by him or anyone else.

"The water, at one point, got to be at least shin deep and just kept coming," Lloyd said. "It was too much water and it went where it wanted to go because there was nothing to stop it." RRR personnel used a measuring stick to document how deep the water actually got -- with one measurement at least 7-1/2 inches deep on the northwest side of the building.

Water marks could easily be seen throughout the interior and exterior of the RRR offices. Staffers were working to remove as much water as they could as the rains began to slow, and were bringing in a water vacuum to try to lesses the damage to the building.

Across the street at Sullivan's Kitchen and Produce, last week's storm that tore off the building's front porch led to water getting into the business on Thursday due to existing roof damage. That business also reported water getting into its restrooms from a leak.

Water was also reported in the Franklin County Courthouse basement as a result of the storm.

Along Main Street, several business saw flood waters enter their buildings, including Meadville Nutrition, G.L. Jones Industrial, Meadville Fitness and the former Toad House building. Late Thursday, business owners were assessing the level of damage to their storefronts with many using water vacuums to remove excess moisture from their locales.

Meadville Police and the Franklin County Sheriff's Department went to check on those impacted by the flood waters, but reported no injuries as a result of the storm. Authorities also worked to slow traffic as streets quickly became inundated making travel particularly dangerous.

In nearby Bude, flood waters also overwhelmed storm ditches throughout the town, but Public Works staffers said that problems were minimal as they toured streets to see how runoff was being directed away from residential areas. Waters covered a portion of First Street and Railroad Avenue for a short time with some low-lying areas seeing large volumes of standing water that came close to some houses and outbuildings, but no major damage was reported.

Those same heavy thunderstorms also produced large amounts of rain in the Kirby area west of Meadville, with no damages immediately reported.