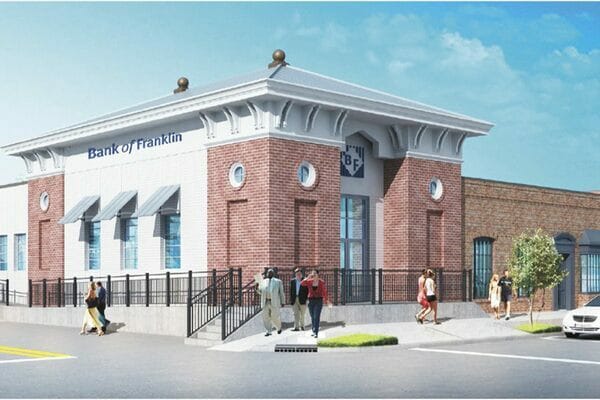 One of the most recognizable corners in downtown Meadville is getting a face-lift as the Bank of Franklin has announced long-term plans to renovate its headquarters at the corner of Main and Walnut streets.

The start of planned improvements coincide with the local financial institution’s 110th year in business and demonstrates the bank’s commitment to the future, the community it calls home and its dynamic customer base, according to Bank of Franklin President and CEO Brad Jones.

“We are excited to launch this new phase with Bank of Franklin that will include a state-of-the-art exterior building design that also reflects the bank’s history,” he noted.

“There will be some cosmetic work to the inside of the bank as well that will include improvements to the floors, walls and ceilings, but the big changes will be to the exterior.”

The design work for the renovation is being overseen by Joseph Orr Architecture P.A. of Madison.

Paul Jackson and Son of Brookhaven will serve as the general contractor handling the scope of the work.

“Work has already begun on this overall effort, but the finished product won’t materialize overnight as there is a great deal of work that has to be done,” Jones said.
Among some of the exterior improvements will be the addition of a pitched roof over the front of the bank along with modern signage, new windows and awnings and decorative sidewalk railings.

More noticeable changes will include the eventual removal of the large Bank of Franklin sign that has been a familiar sight along the downtown streetscape for many years.

Jones said the sign that displayed time and temperature is no longer functioning, was too cost prohibitive to repair or replace and does not fit with the new, clean look of the bank building.

Work will also involve sprucing up that portion of the bank building that sits between the Herring Gas corporate headquarters and FBBInsurance along Main Street with a lighter shade to the bricks along with a new awnings, glass and signage.

“When it’s done, we feel like the overall facade will blend into the downtown look that embraces both Meadville’s past and future,” Jones added.

“Everyone involved in this is really excited about this plan and we believe this keeps us at the forefront of investing in our community’s future, which is one of Bank of Franklin’s priorities.”

Jones said bank leaders had been looking for some time at making changes to improve the facility and recently decided to move forward on the project.

Jones said the construction effort is likely to carry on well into 2023.

The Bank of Franklin’s history can be traced to its founding in the early years of the 20th Century under the leadership of Daniel “Dan” McGehee, Luther Whittington, John F. Hollinger, William Calvin McGehee, Dr. A.M. Dodds and F.F. Becker.

The bank opened its doors on Oct. 13, 1912, with its growth tied to Franklin County’s prosperity through agricultural commodities such as cotton, livestock and timber as well as the interests of its entrepreneurs, businesses and residents.

Under a number of leaders through the years, the Bank of Franklin has consistently expanded its range of services to meet the changing needs of its customer base.

Most recently, the institution has expanded its market to include locations in Brookhaven in 2008 and McComb in 2014.

“It is truly awesome to be part of something that has a history of community service like Bank of Franklin,” Jones, who has been in the bank’s leadership role since 2005, said.

“When you’ve been a part of peoples’ lives for 110 years, it says a lot about the level of trust your friends and neighbors have in this business. The Bank of Franklin knows where it came from and has a strong focus on the future of this community and all of Southwest Mississippi.”