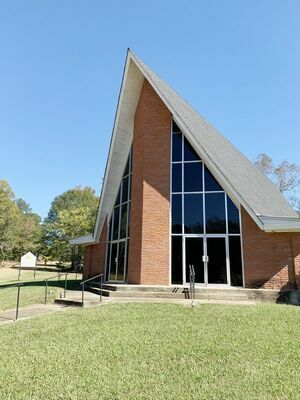 The Bude United Methodist Church will become home to the Bude Community Foundation.

The Bude United Methodist Church served the community for more than 100 years, and the building is being repurposed to do so again — just in a different capacity.

The building changed hands earlier this year when members of the Bude Community Foundation approached the United Methodist Conference with a request to use the building as a community center.

“We were gathering ideas and talking to community members and someone suggested to us that the Bude United Methodist Church was not regularly meeting anymore, and perhaps the United Methodist Conference might be willing to donate the building to us,” Heather Webb Jacobs, who serves as BCF vice president, said.

“So, I approached the Rev. Lindsey Robinson, (who serves as district superintendent with United Methodist Connectional Structures in Brookhaven), and explained to him the vision for (the community center).

“After consulting the last members of the church and other stakeholders, they came to the decision to donate the building to us.”

The foundation began as a way for those with a vested interest in Bude to help the community grow and thrive.

“(The Bude Community Foundation) started as an idea that I, Ann Tyson (Speyer) and Regina Brown Schofield had. We wanted to provide a place that could serve as a community center and gathering space for events, but also a learning space where we could offer classes for children, adults and seniors.

“We wanted to partner with community groups and different organizations to provide educational programming and events that would bring groups and families together. The overall goal is to bring the community together to enhance and build the community.”

For former parishioners of the Bude United Methodist Church, the change is bittersweet as the building holds many memories.

Buddy Godbold attended church there for about 30 years, and remembers helping the Rev. Jack Loflin, along with others in the youth group, with the construction of the current building.

“When I started going there (services were held in) an older building where the A-frame building is now,” Godbold said.

“It was a wooden building. And then they decided to (build) the fellowship hall behind it, and then (they built) the A-frame building either in the late 1950s or early ‘60s. Brother Jack was (pastor) and we had a real active Methodist Youth Fellowship group.

“When they tore the old church down, poured the slab and started up with the brick, where the windows are on the side the mortar wasn’t right on it. So we tore that wall down and took chipping hammers and chipped that mortar off the brick where they could redo it.

“We worked on that kind of stuff, and we (tilled) up the lawn and (did) landscape work out there. We would work during the morning, and during the evening Brother Jack would take us either to Clear Springs Lake or down to the river to go swimming.

“We had a real active MYF group at that time. We played games, had Bible study… we just really had a good fellowship. We were pretty tight-knit. Brother Jack was real active with the young people. All that happened at a good time in my life.

“One of my jobs (while attending) there was to hand out bulletins. I sat on the back row and if anybody came in late, I’d give them a bulletin. I’d stand back there before service started and make sure everybody had one.

“That church meant a lot to me growing up, and it was in a time in my life that I needed that … the adults that took up time with us. And I felt like when I was growing up in Bude and in that church I was just surrounded by good people. I have a lot of good memories at that church and (of) the people there. The people (are) what really makes the church.”

According to Godbold, Loflin served as pastor at the Bude UMC for about four years and was followed by the Rev. Turnage, the Rev. Leggett, the Rev. Lloyd Calcote and the Rev. Jennings Poole, who also pastored there in later years.

“I was 22 at the time. My father served the Bude church for 22 years, and it was actually four churches in the charge – we had Bude and Mount Olive and Mount Vernon, which is over in Amite County, and Oak Grove. We went to three of those churches every Sunday.

“A lot of the time, I would go with him to all of them and if he needed me to play the piano I would play or I would sing. I married in 1983, so I did that as long as I could then, but then when I started having children it just got to where it was not feasible (anymore).

“There was a tornado in Bude in 1984, I believe it was, and my daddy went around the community and kind of found some people that needed help and they needed the church, so he befriended those people and brought a lot of them into the church.

“They had not been going anywhere (previously). And they had children. That was some good times. There’s been lots of people go through Bude church, and they’ve either left because they moved to another church or they moved away, but we have lost a lot through death.

“When we first came, we had a pretty good membership. It was largely older people — I think I was pretty much the youth. We had a lot of wonderful, wonderful people. With the four churches, we loved them and they loved us, and they were just like family. And the ones that are still with us are still special to me.

“My daddy left there in ’97 I think, and they’ve had several pastors since then. Mrs. Dorothy McGehee for years was the glue that held the church together. Mrs. Dorothy and Mr. Mayes (McGehee) were all for Bude Methodist Church. She was quite a lady.

“We loved Bude. The Mount Olive group was coming on second and fourth Sundays to help us beef up our crowd, then COVID messed up everything. It got down to where it was just my brother and me. We haven’t had service there in a long time.”

After her brother – the Rev. Bobby Poole – passed away, Impson was concerned about what would happen to the building.

“It bothered me that the church was going to be empty and probably could be getting vandalized,” Impson said.

“So I prayed and asked the Lord what to do about it. The district superintendent called me and was expressing his sympathies about Bobby and I (shared my concerns about the building).

“I said, ‘I want you from a conference level, because you have more contacts than I do, to be on the lookout for some group that could use the building.’

“I didn’t know it at the time, but I think the Bude (Community) Foundation had been kind of scouting it out, and what they really (were) wanting if they couldn’t get the building was to use the building and let us continue to have church there.

“It wasn’t but a couple weeks (after that) that the district superintendent called me and said (the foundation) wanted the building. So I asked – because it really belonged to the Methodist Conference, it didn’t belong to me – I told them, ‘I would like for someone to use the building, and I would like to give it to them, because there’s no debt on it or anything like that.’

“They allowed us to do that, since it’s kind of mission oriented. It’s not a church, but it is the work of the church, reaching out into the community and trying to help them have a little better life and some inspiration. I’m just excited about all that.”

With the use of the building, the Bude Community Foundation hopes to provide activities for local families.

Several events are already lined up for the remainder of this year, according to Marsha Webb, who serves as programs director with the foundation.

“Our first activities are for 3 and 4 year olds and their moms,” she said.

“We’ll be having four events between now and Christmas. (The events will include) activities, snack time and a short workshop for parents. Each one of those will last about an hour.”

The first of these events is scheduled for Wednesday, Nov. 17.

Each event is tentatively planned to begin at 10 a.m.

The Bude Community Foundation is seeking grants, and has been awarded one for $1,000. The entity hopes to provide services to the community free of charge or at a very low cost.

A final service for the Bude United Methodist Church is slated for 2 p.m., Sunday, Nov. 14.

Those scheduled to speak at this event are Ray Carlock, the Rev. John Altman, Impson, Speyer and Webb.

Refreshments will be served after the service closes, and the community is invited to attend.

The Bude Community Foundation is currently comprised of 10 members, with Speyer serving as president, Jacobs as vice president, Schofield as secretary, Richard Baker as treasurer, Webb as programs director and Morgan Halford Poore as attorney.

The remainder of the board includes Cassandra Tillman Vaughn, Carlock, Catherine Sims and Veronica Roshay Brown.