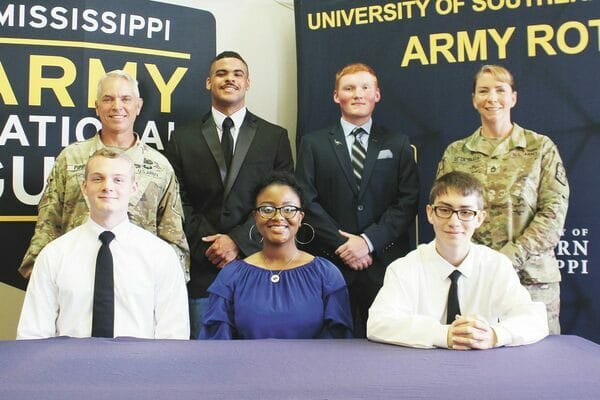 Franklin County High School’s Junior Reserve Officers’ Training Corps — or JROTC as it is better known — hosted its first-ever Military Signing Day on Thursday, May 5 with a number of cadets enlisting in military service or accepting scholarships to participate in post-secondary ROTC programs.

“It was a great occasion to have five of our cadets take part in this celebration of their decision to serve their communities and the nation,” Col. (retired) Lynn Pippen, FCHS JROTC instructor, said of the initial program.

“When students sign on to receive scholarship for athletics or the band in a school setting, there is a ceremony to celebrate those milestones.

“We thought it was appropriate to do the same thing for those in the JROTC program that are committing to continuing at the next level of service.”

Pippen along with Sgt. First Class (retired) Marjorie De La Garza, who also serves as a FCHS JROTC instructor, coordinated the program which was held in the campus library.

Among those cadets (in alphabetical order by last name) taking part in the ceremony were:

• Ayden Zachary Baylor Harrell and Gabriel Griffin, who have both enlisted in the Mississippi Army National Guard with plans to enter the University of Southern Mississippi Golden Eagle Battalion as a Simultaneous Membership Program (SMP) cadet.

Staff Sgt. Carey Jackson of the Mississippi Army National Guard was on hand at the gathering to welcome both cadets into the organization.

• Klinton Johnson received and accepted the four-year Army ROTC National Scholarship — valued at $59,920 — and will contract as a cadet with the University of Southern Mississippi Golden Eagle Battalion in Hattiesburg this fall.

Johnson was joined by his family and USM’s Professor of Military Science, Lt. Col. Walker Nordan, for the announcement.

• Sa’Myria McCoy received and accepted a three-year ROTC Scholarship and will join the Braves Battalion at Alcorn State University beginning this fall.

She welcomed her family and ASU’s Professor of Military Science, Lt. Col. Jackey Fortenberry, to the program.

• Corey Ward enlisted in the United States Marine Corp and is scheduled to ship out for basic training soon.

“We are extremely proud of all of these cadets as they pursue all the military profession has to offer in defense of our great nation,” Pippen continued.

Pippen said he hopes the signing ceremony will remind students there are tremendous opportunities for personal growth and learning through the military.