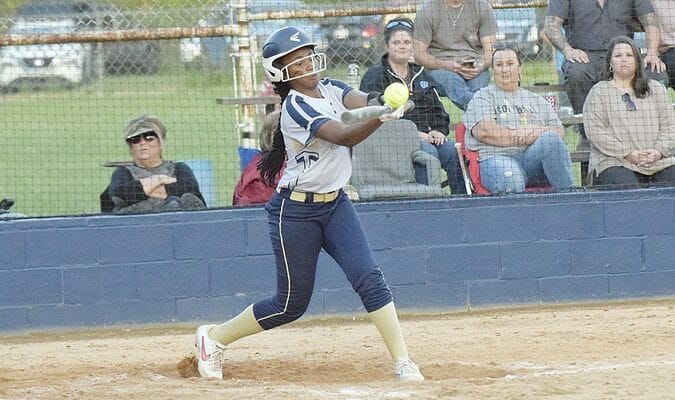 Franklin County's fast-pitch softball team had few answers for what the Wesson had to offer during Tuesday's finale at home and came up on the short end of a 10-1 decision to the Lady Cobras.

Despite the loss, the Lady Bulldogs wrapped up their regular season with a 9-8 mark and were 6-2 overall in Class 3A District 7 regional competition during this year's campaign.

Now, FC enters the post-season as the No. 2 seed from the district while Wesson claimed this year's regional crown and the No. 1 seed as the team starts its run past the regular season.

During the wrap-up contest played Tuesday, April 19, Franklin was limited to two hits with catcher Sadye Scott (1-for-1) and second baseman Marianna Thomas (1-for-2 with a strikeout) making contact with the ball during their respective at-bats.

Additionally, Thomas plated her team's lone run on a timely sacrifice shot by Scott — good for her team's solo RBI — in the bottom of the fifth inning.

In all, FC batters struck out 14 times in the contest and left seven base runners stranded over the course of seven innings.

Romero, Thomas, Amberly Wallace and courtesy runner Tori Jackson were each credited with a stolen base for the Lady Dawgs.

Wesson pounded out 10 hits in the contest and set the tempo of the game by scoring six runs in the first inning, two in the sixth and one each in the second and seventh frames. The visiting team left 10 runners on base and collected seven steals against the Lady Bulldogs.

FC's Karlee Wallace worked seven solid innings from the pitching circle and walked eight Lady Cobras' batters while striking out three. She threw a total of 145 pitches with 74 of those being strikes (a 51 percent performance), and four of Wesson's 10 runs in the game were noted as being earned.

This game marked the second loss of the season to Wesson as FC previously fell to the Lady Cobras on the road by a 7-3 margin back on Monday, March 28.

Franklin County is set to open Class 3A post-season play by hosting Southeast Lauderdale of Meridian at 5 p.m., Friday, April 22 and will travel to face the Lady Tigers at 2 p.m., Saturday, April 23. Another game in the best-of-three series, if necessary, would be played on Monday, April 25 in Meadville.