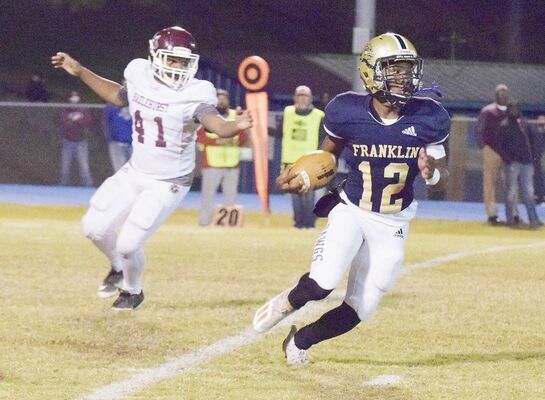 Franklin County High School's Donovan Moore advances the football during Friday's Class 3A first-round playoff game against the Hazlehurst Indians at Louie Mullins Memorial Stadium in Meadville. The visiting Indians upended the Bulldogs by a 42-8 margin. FC's season ended with a 3-7 mark overall.

Franklin County's post-season run as the No. 2-seeded gridiron team from 7-3A came to an abrupt end Friday, Nov. 5 as Hazlehurst — the No. 3 seed from District 6-3A — claimed a convincing 42-8 win over the host Bulldogs at Louie Mullins Memorial Stadium in Meadville.

The visiting Indians carved out 337 all-purpose offensive yards in the outing — 194 of those on the ground via 28 carries while picking up 143 through the air on an 8-17-0 passing performance.

On the other hand, the Bulldogs' ground game was stymied in gaining only eight yards on 25 carries with much of the negative yardage coming on fumbles. FC had a 9-for-17 effort via the airways for 133 yards that was also hamstrung by four interceptions — including three of those which eventually turned into points for the Indians.

Hazlehurst took the early momentum late in the first quarter thanks to a three-play drive capped by a 55-yard touchdown run by Zyrian Jackson with 4:57 remaining in the initial frame.

The Indians intercepted a pass on FC's next drive and returned the ball to the Bulldogs' 6 yard line. Hazlehurst would score on another three-play drive — in which Cameran Hawkins raced from six-yards out for the score with 3:42 left to play in the first quarter.

Hazlehurst's Jackson then connected with receiver Doug Nelson on the two-point conversion pass to give the Indians a 14-0 lead.

Franklin's lone score on the night came on a drive that drained all but four seconds off the clock in the first quarter. In the series, seven of the eight snaps were rushing plays by rotating quarterbacks JaMarlin Green and Va'Quez Rancifer and tailback Tyrese O'Neal.

The big play in the drive was a second-down Rancifer-to-Green pass completion for 37 yards to put the ball at the Indians' 16.

Green ultimately raced into the end zone from five yards out for the touchdown. He then connected through the air with receiver Jamal Coleman for the successful two-point conversion pass, which helped to pull FC to within six points of the lead, 14-8.

That score would remain intact through the remainder of the first half, but Hazlehurst turned things up a notch by scoring three touchdowns in the third quarter and effectively put the game out of reach.

The Indians' first score of the second half came on a 12-play drive that drained five and a half minutes off the clock. The series saw Hazlehurst quarterback Zyquavious Harris hit Nelson on a 14-yard strike on fourth down for the touchdown. Green blocked the Indians' point after try, but the visiting team had increased its lead to 20-8.

About two and a half minutes later, Hazlehurst strung together a three-play, 58-yard drive that was boosted by a personal foul face mask call against Franklin County. After the penalty was marked off, the Indians had the ball at the Bulldogs' 20, and Harris called his own number and found the end zone from 20 yards out with 4:06 remaining in the third.

A two-point conversion pass from Harris to Nelson opened a 28-8 bulge for Hazlehurst.

Then with 1:47 left in the frame, Harris connected with Nelson on a 54-yard touchdown bomb for another score and Jakeevion Minor booted the extra point for a 35-8 lead over Franklin County.

The Indians scored once more in the final period of play as the Bulldogs turned the ball over both times on interceptions. FC gave up the first of those turnovers to start the fourth quarter and the Indians marched down the field in seven plays. Despite a trio of penalties to start that particular series — an unsportsmanlike call followed by a false start and delay of game — Hazlehurst was able to wrap up the drive as Harris raced in from eight yards out for the touchdown with 9:30 left to play in the game.

On Franklin's ensuing drive, Hazlehurst collected another interception and was content to run the clock out to preserve the Indians' victory.

The Bulldogs, who finished their season with a 3-7 record overall, were led on the ground by O'Neal who rushed 11 times for 24 yards while Green finished with seven carries for eight yards. Donovan Moore had a single carry for seven yards while Xavier Rankin had a lone tote for -4 yards and Rancifer collected five carries for -27 yards.

Green was the leading receiver — thanks to three snares for 89 yards. FC's Bradley Washington caught three passes for 25 yards and Coleman also had three grabs for 19 yards.

On defense, Green finished with 12 tackles while teammate Larry Pernell accounted for seven tackles and a sack. Amarion Wilson, Josh Smith (in his first game back since suffering a leg injury earlier in the season) and Ramontae Cameron each finished with four tackles.

Peyton Hebert had a fumble recovery for the Bulldogs in the contest.

Statistics by Trey Hill, Lane B. Reed and Sean Dunlap