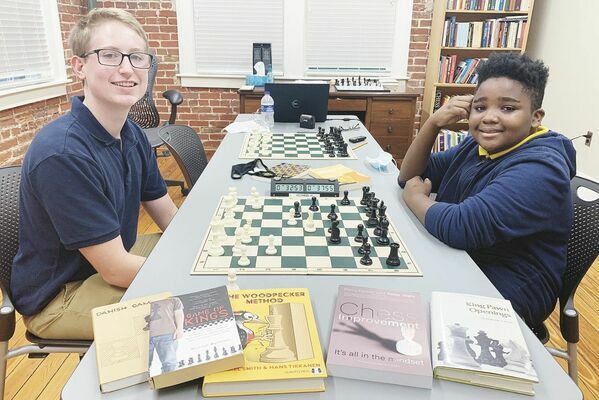 Benson Schexnaydre (left) and Austen Johnson (right) took part in the Mississippi Chess Association’s annual championship tournament held Oct. 23-24 at CSpire headquarters in Ridgeland. Schexnaydre, a Franklin County High School sophomore, claimed first-place honors and the MCA state championship during the event while Johnson, a seventh grader at Franklin County Middle School, finished in a four-way tie for second place in the U1500 competition at the tourney. The duo have practiced their craft through the Franklin Chess Center in Meadville since 2015.

The MCA’s annual championship tournament at CSpire’s headquarters was one of the largest events in the organization’s recent history with more than 50 participants in two competitive sections.

Johnson, a Franklin County Middle School seventh grader, finished as part of a four-way tie for second place among U1500 participants in the tourney.

“My brother, who is four years older than me, had started playing chess and that sparked my interest in it,” Johnson said. “I saw him play it, and I said I wanted to play, too.

“I feel like I have gotten stronger (as a player), but probably not strong enough.”

Schexnaydre said strength in terms of chess play comes through familiarity and the quickness of mentally calculating different moves.

“With familiarity, you see those positions many times and if you have lost in any of those positions ... you will remember that you are not supposed to do that and make a better move the next time around,” he continued.

“And with the quickness of your play, when you have a timer — and let’s say that you have an hour on the clock and most games last 40 moves — a minute and 30 seconds is a short time to calculate all your possible moves.

“When you get better or stronger, being able to calculate your moves faster — in about half that time — can help you win.”

Where chess is concerned, the old adage of practice making perfect, according to Dr. Jeff Bulington, might not be an accurate mantra for the players in his charge.

“Around here, I like to say practice makes practice,” Bulington, who heads the well-known Franklin Chess Center in Meadville, noted. “Whatever you do in a practice session is what you’re going to do in a tournament.”

Bulington said both Schexnaydre and Johnson began learning to play chess in 2015 — with Benson in fourth grade and Austen in first grade at the time.

Another element to chess success comes in the form of personal confidence, according to Schexnaydre.
“Being confident in your playing ability means that sometimes you will see a move and think that you don’t want to play that because you might lose,” he added. “But if you are confident in your play and can calculate it out, you will put your best move on the board.”

Johnson agreed with those sentiments regarding confidence, but said a player cannot cross the line into over-confidence.

“Whether you make a winning move or not, there’s always the chance that you could make the wrong move,” he continued.

Schexnaydre said the recent MCA competition featured a lot of familiar faces — some he had previously played and others he had not.

“My last round opponent I knew very well and had prepped my opening versus him,” he added.

“In the state championships for high school, I was winning versus him, but we drew and that ended in a playoff where he won the chance to represent Mississippi. This time, I won coming out of that round.”

Despite his most recent success, Schexnaydre seems firmly rooted in humility — by not letting winning a state title go to his head.

“I actually heard congratulations a little too much, and I never want to make people feel like I am somehow better than them,” he said.

“Still, right after the game, I was greatly happy that I won. In my head, I didn’t want to count my chickens before they were hatched and had to make sure I was alright.

“Even after I had won, I really tried to keep it all in perspective. When I was handed the $500 (prize), that was when I got excited.”

In terms of previous chess success, Schexnaydre is no stranger to titles as he was a co-champion with two other competitors during his eighth-grade year prior to the coronavirus pandemic.

“During COVID-19, I took part in the online competition and didn’t do too well in that,” he said. “Online chess is very different, in my opinion, at several levels.”

For Johnson, the greatest motivation in chess is the thrill of victory — fueling a desire to move forward for a chance to win in the next competition.

“Losing is the complete opposite of how great it feels when you’ve won,” he said. “I remember that we played in an event in Kentucky and I wound up losing three times, but still was able to finish in first place. I disliked losing, but enjoyed winning.

“Chess comes second to academics in my life, and the lessons from chess also play a role in areas such as science where deductive reasoning is used along with mathematics.”

“There’s something about taking delight in solving those kinds of problems, which means a person is playing chess not because someone is asking them to or pushing them, but they are doing it because it is something they enjoy,” he added.
“That, I think, has led both of them to further lessons that will benefit them down the road in terms of chess and other things ... to learn if you want to succeed in chess, there are ways you have to conduct your life.

“I would say they have both found their own ways to make that happen. That, to me, is the greatest indication of their character as players and reflects well on their families and their work ethic.”
Bulington said both players have an attitude of getting the most out their experience in chess — an attitude that pays dividends as opposed to a mindset of merely getting by.

Schexnaydre and Johnson both praised the support they have received from their families in terms of their chess play, which involves numerous hours each week beyond the time they spend on their school work.

Johnson finished in a tie with Mark Nicholas of Flowood, Buck Rives of Oxford and Lucas Wang of Madison in the U1500 competition.

Yashoda Sarathchandra of Clinton finished as the 2021 MCA section champion.